The History of NTC

The Start of the Journey

The College started with seventy-six students and sixteen faculty members. Classes were held in a two-storey nine room building on the corner of Mendiola and Legarda Streets in Manila. Dr. Jose P. Laurel, who later became the president of the Republic of the Philippines, served as the first Chancellor of the College. He served the NTC community from 1928 to 1953.

Among the pioneer members of the faculty were distinguished professionals of established reputation, led by the founders of the College, Dr. Segundo M. Infantado Sr.  and Dr. Flora A. Ylagan. The power-house roster of faculty helped to attract more enrollees. Student population rose on its second year of operation despite the disastrous world-wide economic depression in 1929.

In response to the increase of enrollment, NTC occupied its second site in Lepanto corner Paredes Streets in Manila. At this point, NTC holds the distinction of being the first to be authorized to offer General Secondary classes for teachers during the long vacation of 1930.

Further expansion was seen in 1932 when the college moved to Azcarraga, known today as Claro M. Recto Avenue. The site was occupied by the institution from 1932 to 1939.

Serving the Nation Through Education

The Second World War interrupted the expansion program of the College and destroyed much of the improvements it took years to build. The occupying Japanese Armed Forces purged the Library of all books which dealt with Western Culture, especially those American in nature as well as the collection of specimens which greatly reduced the laboratory facilities.

Liberation in 1945 brought about reorganization and renewed dedication of the College to the cause of teacher education. The campus was relocated at Tanduay Street, known today as Nepomuceno Street, in Quiapo Manila. When classes resumed at the opening of the school year in 1945, only a third of the pre-war students were able to return. Yet the College served more than double the old enrolment because its facilities were used in the evening without remuneration by the United States Armed Forces for educational purposes. Thus, NTC hewed closely to its avowed purpose of serving the nation through education in general and teacher education.

The College moved several steps forward by including new courses from the Kindergarten to the Doctoral levels. It would be worth noting that the NTC was the first to offer a three-unit course in Contemporary Philippine Literature in English. It was a required course for BSE and AB students majoring in English in 1946. The College was also the first to offer Research Course in Contemporary Philippine Literature in English in the Graduate Division in 1949. The College, too, was the first to teach Rizal’s Life and Works in Filipino.

In 1953, Dr. Segundo M. Infantado, Sr. sat as the second president of the institution until 1962. Further improvements were administrated such as the erection of the college library building in 1947 and elementary school building in 1948. To meet the demands of the changing times, the College offered the One-Year General Clerical Course in 1959.

The College moved several steps forward by including new courses from the Kindergarten to the Doctoral levels. It would be worth noting that the NTC was the first to offer a three-unit course in Contemporary Philippine Literature in English. It was a required course for BSE and AB students majoring in English in 1946. The College was also the first to offer Research Course in Contemporary Philippine Literature in English in the Graduate Division in 1949. The College, too, was the first to teach Rizal’s Life and Works in Filipino.

In 1953, Dr. Segundo M. Infantado, Sr. sat as the second president of the institution until 1962. Further improvements were administrated such as the erection of the college library building in 1947 and elementary school building in 1948. To meet the demands of the changing times, the College offered the One-Year General Clerical Course in 1959.

Dr. Flora A. Ylagan succeded Dr. Infantado and became the third president of NTC from 1963 until 1969. It was during her term that the Administration Building was extended to accommodate its increasing number of enrollees.

On 1969 until 1987, Dr. Cresencio G, Peralta served as the fourth president of the institution.

Being actively involved in community service or non-formal education since 1948, NTC was the first institution in the Philippine educational system that has a Parents-Teachers Association (PTA) in the tertiary level introduced in 1972. It was also chosen as a Population Education Pilot School in Metro Manila in 1974. On 1977, the One-Year General Clerical Course was replaced by the Two-Year Junior Secretarial Course. On the same year a Community College for the Food Technician course was likewise opened.

Through the years, the NTC has continually striven to keep abreast of educational development here and abroad.  It has always endeavored to make its program of training relevant to the life of the nation, and the conditions prevailing among the people for whose welfare its students are being trained. Therefore, the increased emphasis on science and communication has impelled the College authorities to acquire an additional site where the Science Building was erected.

Dr. Priscilla Y. Arguelles was elevated as the college president on 1987 and served the institution until 2016. Among private educational institutions in the Philippines, it has attained in its own right, through years of performance, a pre-eminent place in educational leadership, particularly in the field of teacher education. The College was awarded a Plaque of Recognition on September 12, 1984, by the Department of Education, Culture, and Sports (DECS) for its invaluable service to the country as a private institution of learning and in ensuring a strong partnership in education between the government and the private sector.

NTC saw an influx of students, thus further facilities improvements were seen. To enclose the entire building block for the security of the students, the Board of Trustees decided to put up two additional halls in place of the old college building. The latter was demolished to make way for the Ylagan Hall and the Infantado Hall.

The Education Program of the College has been accredited and is classified under Level III as of July 10, 1987, by the Philippine Association of Colleges and Universities- Commission on Accreditation (PACU-COA).  Now, the program is in the Level III reaccredited status.

To give new meaning and significance to the preparation of kindergarten, elementary, secondary and college teachers, as well as administrators, supervisors and other specialists in education, a five-year course, Bachelor of Elementary and Secondary Education (BESED) was opened in 1988. Responding to the challenge of bringing technology into the classrooms, computer education enriched the General Education curriculum and a new major in Computer Education was added in the BSED. In consortium with Information Professionals, Inc. (IPI) installation of computer laboratories in all levels was made and faculty training in technology integration became the major infrastructure and human resource developments, respectively.

Preparing Manpower for the Industry

In 1993, a ladderized Four-Year Hotel and Restaurant Management course was opened which aimed at providing education and training that would meet the needs of the industry for entrepreneurs, entry level jobs as well as for managers, supervisors, trainers and educators.

The I.T. Building was erected in 2003 to house the computer laboratories to support the pursuit of the institution for its graduates to be attuned to the modern times.

The Bachelor of Library and Information Science (BLIS) has replaced the Library Science major of BSE and BEED in 2007. This has paved the way to making the major a straight program.

With the introduction of the K-12 program in the Philippines, NTC offered in SY 2016-2017 Senior High School offering both Academic and Tech-Voc. Tracks. Veronica Infantado-Fernandez, the corporate secretary, sat as OIC of the institution on 2017 until 2018.

The Acquisition of AC Education

In 2018, The National Teachers College officially became part of AC Education, the wholly owned-education arm of Ayala Corporation with Alfredo I. Ayala as the college president.

Ayala Corporation started investing in the education sector in 2012 through AC Education, with a vision of empowering Filipino parents and their children by delivering inclusive, quality education geared at improving employability for its high school and college graduates. With this vision, came the establishment of APEC Schools (Affordable Private Education Center, Inc.) for secondary education and the acquisition of University of Nueva Caceres (UNC) located in Naga City, Bicol Region. APEC Schools offer Junior High School and Senior High School across Metro Manila, Cavite, Rizal, and Batangas, and has an innovative and progressive approach to both learning and employability. UNC is the oldest and one of the largest private school in Bicol region, offering programs in Arts and Sciences, Basic Education, Business and Accountancy, Computer Studies, Criminology, Education, Engineering and Architecture, Graduate Studies, Law and Nursing. Together with NTC, AC Education aims to transform student lives through affordable, quality education.

True to its mission and vision, NTC continues to perform its share in educating and training teachers, administrators, supervisors, and other professionals who will serve in the interest of the Republic of the Philippines and the world at large.

Added to all these may be mentioned the periodic revisions and enrichment of the curriculum of general and professional education and the improvement of the methods and technology in instruction. 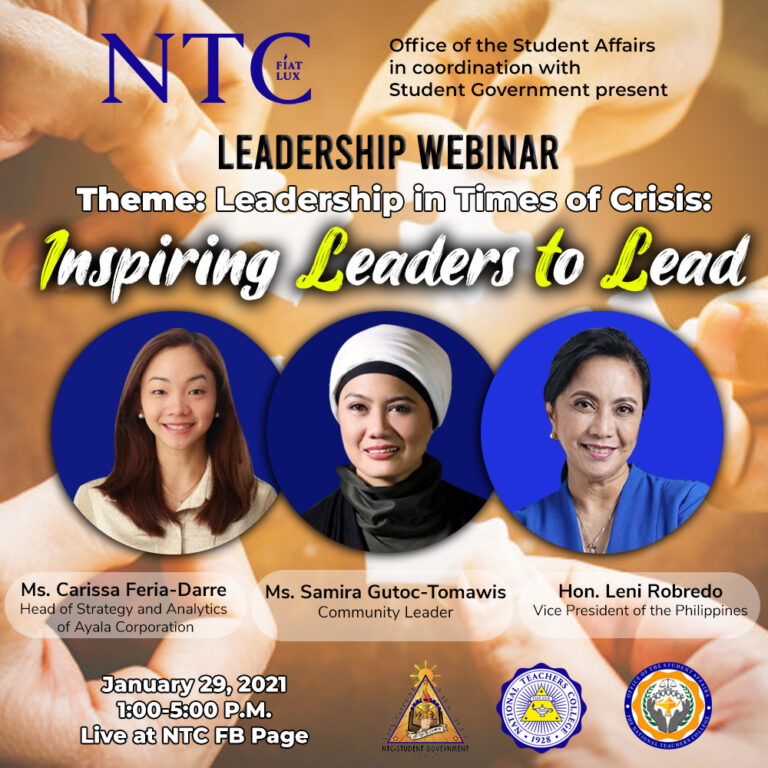